Please note that the site is current in BETA status, which means some functionality is still being developed and improved.

2. What do vocabulary levels tests measure?

Items appearing in vocabulary levels tests are drawn from frequency bands, i.e. ranges of words which normally cover 100, 500, or 1000 items. Not all of the items appearing in the designated bands are included in the test; only a representative selection of words are included (typically 30 items per 1000 item band, or 3%). A student is deemed to have mastered a band when they have correctly responded to at least 98% of the items sampled from that band.

The bands of words themselves are drawn from wordlists, which are comprised of the most frequent words of the target language as a whole. The New General Service List (NGSL), which is one of the wordlists utilized by vocableveltest.org, covers 92% of the words appearing in general English texts.

3. How can the results of vocabulary levels test help teachers and researchers?

Teachers and researchers use vocabulary levels tests to estimate the percentage of words learners know. Once this information has been established, it can be used to inform decisions about which materials to assign to students for language study purposes.

It is well established in the research that non-native English readers need to know at least 98% of the words in a text to be able to understand it without constantly looking up the meanings of the words in a dictionary. This level of unaided comprehension is necessary to engage in activities such as extensive reading and task-based learning.

The following conditions must be met in order for the results of a vocabulary levels test to be valid:

This site endeavors to meet these conditions in order to ensure that the results of the tests it provides are valid, reliable, and useful.

4. How do I create vocabulary tests?

5. How do I administer vocabulary tests?

To administer a test to your students, provide them with the submission link. This is displayed at the top of the test creation page:

Tests can be submitted on both desktop and mobile devices, and are compatible with any modern web browser.

Note that students do not need to log in with Google in order to submit a test. Instead, they should provide a name, number, or other identifying information, when they submit their test results.

6. How do I view the results of a vocabulary test?

7. What wordlists are used to generate test items?

8. What question types are supported?

The following question types are available:

9. What information does the site collect?

You will need to log in with a Google account to create and administer vocabulary tests with this site. For more details about what information from your Google account is made available to this site, please see this page.

When you create and administer a vocabulary test with this site, we will keep a permanent anonymized record of the results of the test, including (but not limited to):

N.B. We will never reveal any information that allows other users to individually identify submitters of tests you have created. This information is only made available to the creator of the test.

Under the Creative Commons Attribution-NonCommercial-ShareAlike license, the site provides teachers and researchers with full access to anonymized results from all tests administered via the site.

N.B. We will never reveal any information that allows other users to individually identify submitters of tests you have created. This information is only made available to the creator of the test.

The site also provides teachers full access to the wordlists used to generate questions for the vocabulary tests, which include frequency data, meaning senses, definitions, and translations for each item.

11. How does VocabLevelTest.org compare to other vocabulary tests?

12. How do I provide feedback? 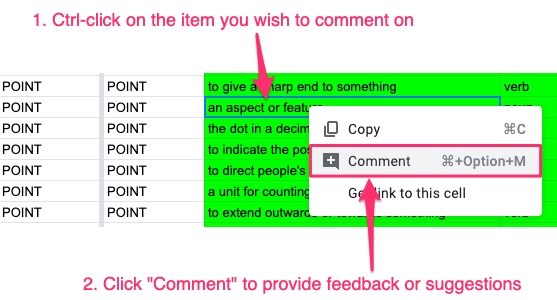 13. What new features are coming in the future?

We are hoping to add the following features in future updates:

14. How do I cite this site, its wordlists, and its tests?

Please use the following reference to cite this site:

For information about how to cite individual wordlists and tests, please see the wordlists page.

We are grateful to EnglishCentral for sponsoring the development of this site. If you find this site valuable and would like to continue to see it grow, please contact us about becoming a sponsor.